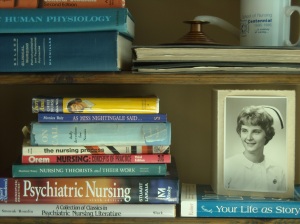 And, most importantly for the moment, the year forty-three of us graduated from a three-year diploma program in nursing.

Now, that same class has begun planning their fiftieth reunion for next year.  Forty of the forty-three graduates are alive. And so far eighty percent have declared  “count me in” on the reunion. And the others asked to extend their greetings to all.

How is it that these women of the sixties are still so invested in their nursing school class? Think back to a  time of the three-year diploma program—the first year at a college, the final two years in a hospital-based school of nursing.  A time of dorm living, housemothers, curfews of 9:30 during the week and 10 on weekends.  A time of blue-striped uniforms covered with starched white aprons, capping ceremonies, long-sleeved graduation uniforms sporting French cuffs with cufflinks to match the school’s pin.

I know why. One gal gets all the credit for our bonding. When we graduated, that gal—I’ll call her Sally—offered to send out a newsletter every six months. After a few years, when we had settled down a bit, the letter became yearly.  A few weeks before the due date, Sally mailed out reminder postcards. All the rest of us had to do was mail her a letter with our news, enclosing a dollar for her expenses.

In the early days, we received the letters on mimeographed paper in blue ink. Later, it was by Xeroxed copies. And now, it’s mostly by e-mail. The reminder for the annual “classletter” comes each February.

The last few weeks, I’ve had the fun of keeping track of the responses to a reunion query. That involved phone conversations with ten people, plus many e-mails. What struck me was that voices hadn’t changed. What thrilled me was their palpable excitement at meeting again.

And I know what will happen when we meet again in person: as our eyes tear up, we will say the same thing each of us writes when we sign off our annual letters, “Thank you, Sally, for keeping us together.”