In Part 1 of this series, photos of my childhood home in Lafayette, Indiana, fifty-eight years ago and now, prompted many memories, all which could spin off into stories perfect for writing a memoir of that period.

Today, the photos are about the schools and church I attended during those years from third through seventh grade.

When we moved during the dead of winter from West Sayville, Long Island, NY, to Lafayette, my folks sent me to a Lutheran school for the spring semester of third grade. On the few trips I’ve made back to Lafayette, I’ve  never looked up that school, so Marv patiently drove me up and down streets where I thought it may be. In my head, I was a third grader walking down a hill a long way and turning left a long way and the school was on the left side.

In reality, it was the first turn left from my house and down about one long block. And there it stood in its red brick splendor!

The minute I spotted it, I yelled for Marv to stop and jumped out to take a photo. The first and only memory that popped into my mind was that I had cheated there for the first time…on a test on the Martin Luther catechism. Not knowing the answer and seeing something that looked like the letter b on the kid’s paper in front of me, I printed the letter b on the short line for the answer.

Shame! That’s what I could still feel while gazing up at that school. When I’d gotten the test back with my answer marked wrong, I was mortified to see that the right answer was the number 6, so mortified that I never, ever, was tempted to cheat again.

I walked up to the bottom steps and was thrilled again to make out the name of the school embedded in the stone high above the door. Look closely.

After I hopped back into the car, Marv said, “Where next?”

“To my church,” I said, “at Twelfth and Tippecanoe.” I had no problem remembering how to get there. It was as clear in my head as if I was still in third grade and walking to Sunday School.

That church, the Lafayette Christian Reformed Church,  brought our family of seven here to live. My dad, a minister, had accepted a call to serve there. 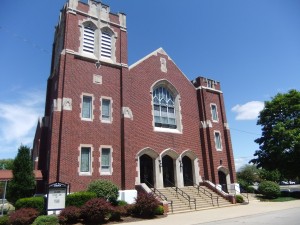 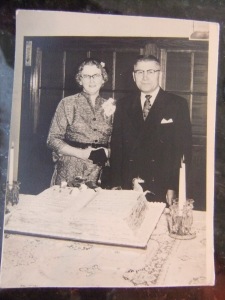 I remembered my folks’ twenty-fifth wedding anniversary celebration in the church basement. My mother’s black and white tiny striped dress made of fabric that crinkled like newspaper. The glass windows behind them that raised so the kitchen on the other side could use the counter to serve. The ’54 Plymouth, light blue on the bottom and black vinyl on top, they received as a present from the congregation.

Could it be that now, on the eve of my own fiftieth wedding anniversary, that my parents were not nearly as old then as I thought them to be?

I remembered our last Sunday there, when my dad had accepted another call that moved our family to Michigan my seventh grade summer. My dad preached using Paul’s words to the Corinthians:  “Finally, brethren farewell…” and I could see people’s eyes mist up in the pews. We  ended that service singing, “Blessed be the tie that binds our hearts in endless love…”, a song that still tugs at my heart.

After that final service, my family formed a receiving line in front of the pulpit. As members of the congregation streamed past, most very teary, one man pressed a quarter in the palm of my hand. Such poignant memories! 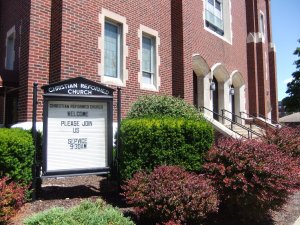 The church is still a Christian Reformed Church and a  few years ago, one of my sisters and I went back there, representing my folks who had passed away, as they celebrated the fiftieth anniversary of the Lafayette Christian School which my dad had been instrumental in helping start. Standing on his former pulpit, I reminisced those times with the congregation from writings I found in my mother’s diary.

From the church, Marv and I went to that school where I attended fourth through seventh grades. Turning right on Fourteenth over to Union, we turned left up the hill to Twenty-sixth where we turned right again. And there it was.

How many times my dad and my friend Lynn’s dad had carpooled us to school! We often walked home, down that Union Street hill, me to my home on ninth and Salem, one block over from Union. 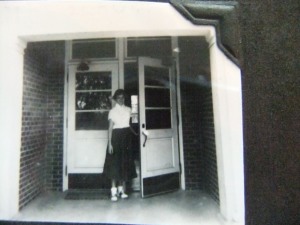 My fourth grade class. I’m on the upper left, apparently not obeying instructions to look ahead at the photographer. Note the stylish scarf around my neck.

Most of us were of Dutch heritage, and it was great fun to don wooden shoes and Dutch costumes for a Dutch bazaar. I’m on the left with clothing sewn by my mother.

My seventh grade year was to be my last at Lafayette Christian. That summer my dad accepted a call to Cutlerville Christian Reformed Church, just outside Grand Rapids, Michigan. On the picture below, I’m sitting to the teacher’s left, wearing a black sweater with an overlay of a white leather-like collar that I thought was just the classiest.

So, again, the potential for memories. Just staring at each classmate can help recall a story. Looking at my clothing elicits more. Thinking of my teachers, well, that does not always bring up happy memories. I spent some time in the hall. I think, even then, as now,  I could be a bit of a cut up.

Next time, I’m wind up this series with a few lasting memories of the famous Frozen Custard stand in Lafayette and some other thoughts about writing memoir. Meanwhile, think back, where were you living during the middle grades, what school and church did you attend, who were your friends, what did you wear, what did you like to eat?

Feel the memories rushing out of oblivion?