It’s good you took the tour in this order,” a guide said. “Otherwise, you’d be depressed at the end.” He was one of our guides on our recent Bucharest, Romania, to Amsterdam tour on the Danube, Main, and Rhine rivers. We could have done the reverse, starting in Amsterdam, but the dates worked better for us to start in Romania. 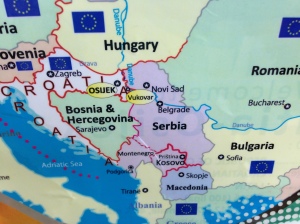 The guide was right. As we traveled northwest on the rivers, I saw brighter-looking towns, people, and futures. But, early on, for example, we were able to visit with a woman in her late thirties. Since our guide had told us about the Serbian-Bosnian war (1995), my husband asked, “How did the war affect you?”

“My parents were killed in the war, and I was twelve,” she said.

I could feel myself gulp. I’d never met anyone so young for whom war changed his or her life. She went on to say she lived in a basement with a family for five years until they could afford something better.

When we finished talking, I remembered I hadn’t asked how she’d spent her twenties and thirties. All I remembered verbatim were two sentences, the one about her parents and when asked her goal, she said, “To leave.”

She meant to leave her city, her country. The country that had changed several times when she was growing up, even though she never moved. There was no future. She’d heard Germany was open to immigrants, and her dream is to get there. But her dream to leave requires money, and she barely makes enough to cover monthly expenses from a low-paying job. There’s nothing left over. Her dark eyes were hauntingly beautiful; her face was filled with longing; her almost perfect English emanated hope.

Another day early on, we met a few teens in a cultural exchange hour. When asked her dream for the future, one girl, obviously bright, articulate, and musically talented, said, “To own a house…with a yard and—what you say?—a white picket fence.” She lived as most people do in a “block of flats.”

Perhaps she’d read Mark Twain. In her country, she’d never be able to own a home either.

Much later, on our twenty-second day, we reached Cologne, Germany. We spent the day with a friend who was born and raised in the States but has lived in Cologne for many years. She said it’s true that her country welcomes most immigrants. And those usually acculturate well; they learn the language and find jobs.

Careers for musicians in Cologne can begin on the street.

My heart hurt. I wished I could magically make those people’s dreams come true. Given a chance, an opportunity, I knew they would work hard to make it in their new country.

An American friend who blogs regularly on her international trips ends her posts each day with a “gratitude moment.”

2 thoughts on “Dreams from the Balkans – Can You Identify?”