going back home for the Fourth of July. Marv wanted to go to his hometown of Prinsburg, Minnesota, for their annual holiday celebration. Our son and daughter-in-law made that happen. They flew in over the previous weekend and our son drove us the three hours there, then another three hours the next day further north to Marv’s youngest brother’s lakefront cottage.

We arrived in Prinsburg just as the noon barbecue lunch was starting in the high school gym. While the rest of us found seating at long tables among the boisterous conversations, Marv mingled up and down the aisles greeting relatives and old friends.

Our daughter and family from Sioux Falls had come too. We were all in charge of keeping an eye on Dad. I’d unwrapped a new bright yellow T-shirt for him to wear, not realizing how helpful that would turn out for spotting him. Of course, Marv wanted me to save the new shirt to give to someone else because he wouldn’t get the wear out of it. But I prevailed.

Marv relished the day, talking, he said later, to about fifty people. Old home week, for sure.

In the afternoon, we hung around at his sister’s home on the main street of town. Relatives came and went; kids had golf cart rides, played beanbag toss, and horsed around at the town’s lovely new playground; and we women sat on lawn chairs we’d taken along and caught up.

There are usually games for the kids in the afternoon, but with a threat of rain, they’d been cancelled.

At suppertime, food materialized out of nowhere. Marv’ sister had orchestrated this second elaborate picnic lunch of the day, topped with luscious brownies. Local relatives helped. We felt nicely pampered and the weather held out all day.

The annual parade along the town’s main street started at 6:00 p.m. At Marv’s sister’s home, we had front row seats. Before the parade started, Marv roamed the street, finding more people to greet. When we later saw several candidates for sheriff in the parade, we joked that with a few pamphlets to hand out, he could have been running for sheriff.

That night we stayed in a hotel in nearby Willmar. Cousins from the Chicago area and other local cousins joined us. What a treat! Cousins we’d not managed to see in our farewell tours.

The next morning, our son drove us to Marv’s brother’s cottage. Marv had not had a good night, so slept off and on during the trip. At the cottage, he loved the long pontoon boat ride his brother gave us on the beautifully blue smooth lake. The weather–a clear sunny day with a breeze–helped make the day perfect. 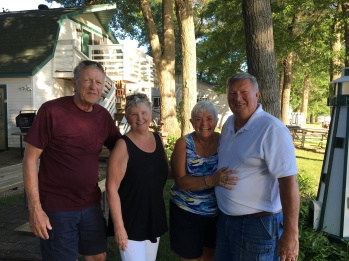 with brother Rog and wife, Marilyn

We had planned to stay overnight, but, due to his poor night, Marv wanted to get home. Our son drove us the six hours home, Marv sleeping the entire way, except for a stop for ice cream. We arrived home after one in the morning.

If I had a penny for all the good things that have happened since Marv’s cancer, and for all the heartfelt hugs I’ve seen him give his siblings, family, and friends, and for all the sacrifices our children have made to take care of us older folks, the pennies would have easily overflowed an old metal milk can Marv has talked about from his  childhood days on the farm.

We are now facing reality. Marv had wanted to go to Chicago the next week, but health challenges intervened. Hospice remains our lifeline. Last week friends from Chicago spent three hours with us, a huge gift as they broke away from other obligations in our area. Our minister came for another two-hour visit. New friends came for coffee. And neighbors stop by to talk to Marv as he sits out front on a lawn chair.

Yesterday morning, we missed church for the first time; I’m hoping that we’ll be able to go again soon. In the afternoon, Marv woke up from a nap insisting on pancakes at Perkins. He’d not eaten much for two days, and, with his increasingly unsteady gait, I wasn’t sure how I would be able to manage. But, as grace (!) would have it, our daughter and family arrived home from a week’s vacation soon after, and they made that wish happen!

having pancakes at Perkins

And now we are off to another week. Thank you, everyone, for all your prayers and encouragement!